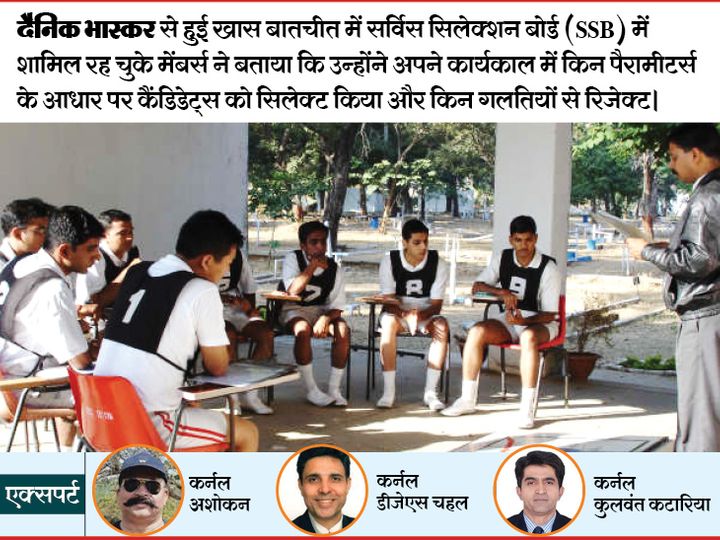 UPSC has released the results of the National Defense Academy (NDA) and Naval Academy exams held on 6 September. The candidates who have been selected will now have to go through the most challenging stage of this recruitment process. Which is called SSB interview. This stage includes physical tests along with various tests related to mental ability, group discussion and interviews.

It is generally understood that to clear SSB, better IQ level and fit of candidate is most important. This is not entirely correct. In addition to fitness and IQ levels, there are many factors who exclude candidates from SSB, if the members of the selection board are considered. And most of the candidates are not aware of them.

The NDA, CDS and AFCAT examinations are conducted by UPSC for recruitment to the post of officers in Indian Water, Land and Air Force. Candidates can apply for 11th pass in NDA exam. At the same time, the CDS and AFCAT exams are for graduate candidates. The selection process is the same in all the three exams. After passing the written examination, the candidates have to clear the SSB interview.

The Service Selection Board (SSB) only decides whether you are eligible to become an officer in one of the different wings of the Indian Army in the future. According to Colonel Ashokan, a former member of the same board, about 3 lakh candidates apply for the NDA exam every six months and 5 lakh for CDS.

Of the students who apply, 3-4 percent reach their destination in a defense career. If you have also passed the written examination of NDA, or are preparing for this exam, then you will know about those steps of SSB from which the path of success passes. But, do you know on what basis the SSB panel selects you?

This question can also be answered by the same officer who selects or rejects the candidates. Dainik Bhaskar has spoken to some such officers. Colonel Ashokan, Colonel DJS Chahal and Colonel Kulwant Kataria, who were part of the board, are telling you about the factors based on which candidates are selected or rejected.

Up to 30% of the candidates are selected in the first stage.

The first stage of SSB consists of three tests. The first and second is Officer Intelligence, Picture Perception and Description Test. The third test is based on Quantitative Aptitude, Verbal and Non-Verbal Reasoning. In this way your intelligence level and mental status are tested in the first stage. If you are not mentally prepared and do not have enough intelligence level to enter the army, then you cannot qualify this stage. This is the reason that only 10-30 percent of the candidates are selected in the first stage.

Might be rejected if you just insist on completing the task

Many candidates who have given complex answers to common questions face rejections. Explaining the reason for this, says Col. DJS Chahal, SSB is usually seen as a test where the possibilities of selection are increased by completing the task. While this is half true. Tasks are just a way to test your skills. Understand which skills are being tested through the task, try to develop those skills rather than insist on completing the task.

Not just speaking, listening is also a communication skill

Group discussion is an important part of SSB. Here the candidate has to prove his knowledge and communication skills. According to SSB parameters, listening and observing along with speaking is also a part of communication skill. In a group task or group discussion it is observed how much you are giving importance to the opinions of other team members. Based on this, you will be considered a good communicator. Not being able to listen to others can cause you to be rejected.

In the field where there is interest, it is necessary to get perfection

The biggest question in front of the students preparing for SSB is where can they start. Students are often given advice like participating in sports, practicing debates. With which they can perform better in SSB. Colonel Kulwant Kataria says: Students with basic communication skills and physical fitness should choose the same field in which they have interest. SSB is the perfect way to get perfect where you are interested. It can be sports, debates as well as music.

In the end, this way selection is decided

Psychological tests, physical tests and interviews are the responsibility of the three accessors. On the last day there is a discussion between the three accessors regarding the selection of candidates. According to experts, the candidate selected in most cases has better performance in all three tests. Sometimes there is a slight difference, in such a situation it is necessary to see which skill of the candidate is lacking. Courage, reasoning power and officer intelligence are skills in which it is necessary to be 100 percent perfect.

What about after SSB?

Candidates qualify for the SSB interview after passing the written examination. But SSB is not the last selection. After this, you have a medical test. It is called Medical Board. The Military Hospital takes 6 to 10 days to declare its results. During the time spent on the medical board, the candidates have to stay in the selection center.

Learn in the next story of this special series based on SSB tips, the story of the success of a candidate living in the slum area, for whom it was a challenge to take nutrition and to keep your fitness away.